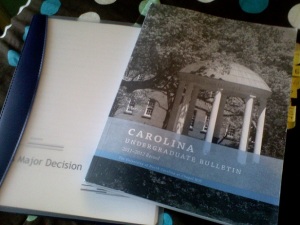 My 35 page report and the “Carolina Bible”

One of the things I wanted to do this summer was pick a major. While this decision may be easy for some, it was not easy for me. And that actually surprised me. For most of my life I have known what I wanted to become and what I liked doing. This has changed very little over the years, but I have grown and matured which greatly expanded my personal interests. Unfortunately, there isn’t a major I can call my “one size fits all.” I am forced to do this really hard thing society calls “choose.”

Choosing comes in a lot of forms. You go to the ice cream shop and there’s strawberry, fudge, and vanilla ice cream. “Choose a flavor.” You head out to a local automotive dealer and set your eyes on a shiny new car. “Pick a color.” Better yet, your best friend is heading to McDonald’s but your sister wanted you to go to the movies. “Make a decision!” they cry. No matter what you call it, every day we are faced with choices. Will you get up as soon as your alarm rings or will you hit snooze? Will you take the highway or the rural road? Should you wear blue heels or black? And so on and so on.

Perhaps I underestimated this when I started out on my collegiate journey. Books were naturally my first love. I was more than happy going to the library and coming home with a stack of books taller than myself. I began writing poetry when I was seven (poetry that my father initially thought I was plagiarizing), and I wanted to be an author by the time I was eight or so. Then I turned ten, and suddenly I loved watching sports—all kinds of sports. I wrote play by play accounts and short sports articles while I watched baseball games on the tiny TV in my bedroom. I wanted more than anything to become a sports journalist. Bonnie Bernstein and Pam Oliver were my heroes. I was going to be a poetry-writing-sports-anchoring-children’s author. Everything was settled.

As the high school version of myself emerged, other aspects of the world influenced and interested me. I realized that although sports and poetry are important, so are politics, family life, the economy, and everyday news. I began to admire the work of journalists like Diane Sawyer, Lara Logan, Jake Tapper, and Anderson Cooper. I watched various news programs (both local and national) and read meaningful articles on the Internet. I discovered that I cared deeply about these issues. I suddenly wanted to become a part of everything that surrounded storytelling. In my journal at the end of ninth grade I wrote:

“I think there are a lot of possibilities to what I could become. Any journalism is interesting to me now. Radio sounds fun. International news and politics interest me. These things didn’t always appeal to me. I used to be a stories, poetry, sports girl. Age has made me more well-rounded.”

In 2008, my parents gave me a camcorder for Christmas and a book on iMovie. I learned how to use the new device in no time, and I read the book in almost a week (there I go reading again!). Since then, I made it my mission to create movies and videos of all the major events in my family’s life. I have goofy movies, Christmas movies, and a graduation video. All of them are decked with sound effects, sound tracks, titles, swiping transitions, and glorious animations. I even named my very own production company (that’s still secret). Just going to the movies gets me excited as I think about all of the awesome movies I could write/make. After all, I am producing my own content, as well as content for others. Perhaps I should major in film.

All of these elements clearly fall in the category of Journalism, which is what I have desired to major in since I was about fifteen or sixteen (when I first started thinking seriously about my career interests in the form of educational training). However, there is still that side of me who wants to read the literary greats and write my own books. I never stopped writing stories and poetry. I don’t intend to stop. I have a creative side that comes out only in fictional words. That’s clearly an English degree, or perhaps Creative Writing. My dad had even mentioned on several occasions that an English degree could work well for me because of its versatility compared to a more focused professional degree like Journalism.

So, I entered college with it all settled. I told everyone who asked that I wanted to be a journalist or work in the media and I was going to major and minor in English and Journalism, I just wasn’t sure how I was going to pair the two. The only thing left was to decide if I was going to double major or major/minor. Not so fast, it turns out I had a few more interests to uncover.

College presented new classes, new challenges, and new passions. After taking an introductory Psychology course, I realized just how much I enjoy learning about people. Now, in many ways this is not a shocker. I often form relationships quickly and my favorite thing about helping my dad at art festivals was talking to so many different people. It was not a shocker that college and all of its fresh faces would appeal to me so strongly. So, it makes sense that I was drawn to psychology and the many facets of the brain and body that control our thought processes and perceptions. It was one of my favorite classes and I still remember much of the material today.

This summer, I wanted to finalize my major. More than anything, I wanted solid research and tools to base my decision upon. I studied the majors I was already interested in, the majors of successful professionals in the broadcast field, and the preferred majors noted in job listings for positions that I would like to work in. The statistics reinforced my decision to major in journalism, provided some extra cushion for my choice to study English, and threw an entirely unexpected fact into my educational trough: over half of the professionals working in the journalism industry today  (in such corporations as ABC and CNN) earned their degree in a liberal arts field.

Wow. Back to square one. Almost. I was in no way going to drop my first two loves: 1) that was not an option and 2) there was no reason to waver from my previous choices. I spent most of my time paying little attention to the benefits of a liberal arts major, however was I missing something? Was there a reason these professionals studied the things they did, and if so, what was the benefit? Furthermore, if I had to choose a liberal arts subject that excited me intellectually, complimented my journalistic endeavors, and left me digging for more, what would it be? Did I have one at all? I came out with an answer in my report: psychology.

While there are many admirable facets to this major, I failed to ask one very critical question: What can I REALLY do with it? If I walked out of Carolina with a sheet of paper that read only Psychology, what job could I do that day? The truth is, very few. To work in the field of psychology itself (which is not something I desire to do) I would have to obtain a graduate degree (which is also something I don’t desire to do, at least not right now). Sure, I could find SOME type of job somewhere, maybe I would land a miraculous job that would lead me to a fast-paced career where my major would eventually mean nothing. But in a tough economy, with a realistic outlook, there are few to no jobs that I could land with just a bachelor’s in psychology. My mom and dad were quick to point this out when I concluded at the end of my report that I wanted to double major in journalism and psychology. If I could not find a job in journalism, psychology would not help me that much. Therefore, it was not the best supplement.

Square one AGAIN. This time I had more understanding and purpose. I had thirty-five pages of hard-core research and several suggestions from my parents. So I went back to the drawing board and mulled over the list of possible majors, giving different categories a try: education, cinema, history. Both my parents and my cousin suggested earning a teaching certificate so I could always have teaching to fall back on. It’s a position that involves many things I enjoy: people, education, kids. It’s a sound choice that I added to my list of possible educational paths. At the bottom of the majors list was sociology (a class I have planned for this fall). I started to read about it as I had done for the other majors and suddenly I was pouring through loads of information that excited me. Perhaps there was something in the liberal arts after all. Here was a major that fused my interests in psychology, people, and communication. It complimented the skills of English and Journalism and would give me the ability to work in the fields that I was interested in. Could this perhaps be the answer?

I’m not ready to declare a major yet. While I have kept my parents from worrying that I had fallen off some wayward mental end by choosing psychology the first go around, I still have to CHOOSE a major (funny how we returned to that word again). I do know that I want to major in Journalism. I also know that I want to pair it with English OR Sociology. I would easily say both by instituting a double minor, but there is no minor in sociology at Carolina. So, what will it be? As of right now, I will stick with the English minor. This fall, I will see how I like my sociology class and talk to professors in all three departments. I have a meeting planned with my advisor. Perhaps I will be able to take classes in all three and find a way to have my cake and eat it too. Hopefully the process for obtaining a teaching license is not too complicated. We will see.

I do know that I will not be adding any more majors or minors to this list. I don’t see this as a dilemma; I see it as a challenge to use this university and my talents to their full potential. I see it as an opportunity to make the most of my education and of myself. There is nothing wrong with liking a lot of things. And just because you enjoy something doesn’t mean that is the best choice for a major. Should I become a therapist because I like people? Should I get my doctorate in English so I can spend as much time as possible reading books? Should I transfer to film school because I like making movies? I doubt it.

In the end, there’s really no need to worry because most people would tell me I’m making the wrong decision all together. Forget poetic writings, telling important stories, and understanding people. Money and employment lies in engineering and statistical science. Oh well. That solves it. Where did I put my algebra book…?